The Easter Services for the Congregation of the Central Western Queensland Uniting Church held in Longreach and Barcaldine were a culmination of the Lent and Holy week services led by Reverend Jenny Coombes.

From Monday to Thursday of Holy week Rev. Jenny conducted half hour reflective services each morning.

On Good Friday she led a very solemn service which involved congregation members undertaking readings and the use of meaningful props laid at the cross to tell the story of Jesus’ crucifixion.

On Easter Sunday the Resurrection was celebrated both in Longreach and later in Barcaldine with celebratory services.

A reporter from the Longreach Leader attended the service and morning tea to see what all the hype was about. He followed this up with photos and a very positive article in the newspaper.

For those who haven’t heard, Longreach and Central West have amalgamated into a new congregation being called CoCWQUCA – or in long hand, Congregation of Central Western Queensland Uniting Church in Australia. CoCWQUCA is pronouned Co-Quokka. 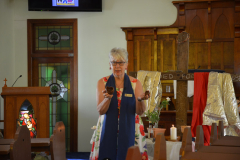 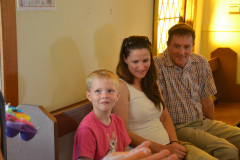 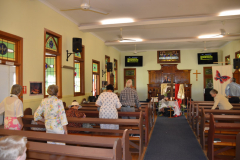